Xia Yezi originated as a NIAONiao voice. She had an original and an append bank, released on August 29th, 2015 and October 5th, 2016 respectively.

She was announced to be a DeepVocal on June 6th, 2019, along with the announcement of the Shaohe Project through a test cover of "离岛之歌" (Lídǎo Zhī Gē | The Song of the Island) by 阴阳师 (Yīnyáng Shī).

Her Soft bank was announced through a cover of "雨桜" (Ame Sakura | Rain Cherry Blossoms) by もももも さん (Momomomo-san).

Her name, 夏叶子 (Xià Yèzi), is comprised of the characters:

An appropriate English rendering of these characters would translate to "Child of the Summer Leaf".

Xia Yezi's appearance appears to have changed drastically from her previous designs, which can all be seen in the gallery.

In her old UTAU and NIAONiao designs, she had long purple hair with large sections that would split out from the rest. She had white wings on her head and an orange-yellow hat with a yellow "X" on the front. Having a largely purple/orange design, she is dressed in a white dress with large amounts of orange trim. She has thigh-high purple stockings, red ribbons that flow from her hair, and green ribbons that flow from her skirt. She almost always wears yellow shoes with orange trim. Occasionally she has an orange staff with a purple, orange, and white flower on it. 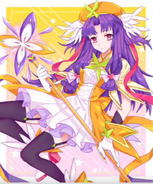 Retrieved from "https://deepvocal.fandom.com/wiki/Xia_Yezi?oldid=2851"
Community content is available under CC-BY-SA unless otherwise noted.