Dev's Twitter
V:GA is a Japanese vocalist for the DeepVocal engine voiced and developed by Kisa.

V:GA was initially created as an UTAU design that was supposed to take place of temporary one put under the name of Rose Mae. After the supposed temporary design gained life on its own, V:GA got shelved for some time as a potential design for another engine that would be open for user-created voicebanks. The opportunity to use it arose in 2019 with Sharpkey getting rebranded as DeepVocal and announcing an open beta. A test voicebank recorded for the engine gave surprisingly satisfying results and a decision for official release was made.

V:GA is a projection of an old software originally written in the early 80s in BASIC which gained rudimentary sentience. Thus they don't really have much of an established personality. The floppies containing a copy of their code has been known to circulate around various countries, with all of the modification contributing to their current image. V:GA might appear friendly but disengaged.

V:GA's name is a wordplay on CGA display standard - the standard palette of which their design uses, a later VGA standard and an Estonian word "viga" meaning a glitch/mistake. The last word marks a proper pronunciation of their name: "vee-guh".

V:GA is of androgynous build and looks. They have pale skin that tends to be rendered white in lower graphic standards, shoulder-length white hair with cyan highlights on the right side and magenta ones on the left side usually tied in a high ponytail and black eyes. They wear a black jacket with white, cyan and magenta embellishments following the vertical split pattern that gets flipped below the waist. Their chest bears a mark resembling a power sign turned 90 degrees clockwise, originally combined with a Commodore logo. Their leggings are either simple black without adornments and their shoes are black and white with cyan (right) and magenta (left) accents. On their hands there are fingerless gloves - the right one is black with a magenta circle and the left one is white with a cyan circle. 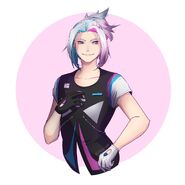 Initial/alternative design by Kisa
Add a photo to this gallery

Retrieved from "https://deepvocal.fandom.com/wiki/V:GA?oldid=2689"
Community content is available under CC-BY-SA unless otherwise noted.