n/a
Tsunone Yuuko (角音ユウコ(つのねゆうこ)) is a vocal for the DeepVocal engine. She is developed and voiced by her creator Reoriie. Originally a UTAU, she was ported to DeepVocal so other people can use her through this program.

This character was formerly known as Yuko Emine (恵美音裕子), but now goes by her new name after rework.

This character is still in development for the UTAU and DeepVocal programs and there will be more banks in the future.

On July 17th, 2019, Yuuko's development for DeepVocal started. Reoriie released her new voicebank on July 29th, 2019 through a track on SoundCloud featuring the song ARROW by niki.

Yuuko is a demon with a passion for drinking wine. Personality-wise, she is a very outgoing, caring, and protective person. She is known to throw dinner parties, to which she invites her many friends. Be careful to not mistake her kindness for gullibility. Although she is kind she will fight back with anything she deems to be morally wrong.

In her DeepVocal design she wears a black romper with a white coat, boots, and red socks. She has a long, barbed demon's tail alongside small pointy horns. 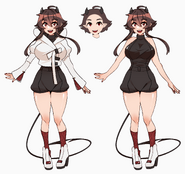 Reference page.
Add a photo to this gallery

Retrieved from "https://deepvocal.fandom.com/wiki/Tsunone_Yuuko?oldid=3410"
Community content is available under CC-BY-SA unless otherwise noted.