They have a Japanese voicebank both voiced and developed by YukitoYuki (幸兔雪).

Toka Aki was originally first released under the name "Tokane Aki (兎歌音アキ)" on 16 October 2013 as a voicebank for UTAU software. On 18 August 2015, they got officially renamed as Toka Aki (兎歌アキ).

During the time from 2013 to 2019, Toka Aki got multiple voicebanks released on UTAU such as Finnish VCV, Arpasing English, Mandarin Chinese CV, and Japanese VCV, CVVC and CV voicebanks.

Aki is generally a warm-hearted person who’s kind and helpful. They might be a little shy for the first time but after a few hours, they're very outgoing and chatty. Their gender expression is something between androgynous and feminine.

They're bad at lying and defending themselves. New situations make them often nervous and can be coward and clumsy at times.

They do not like their little sister Toka Kiia, black coffee, and cooked fish.

アキ/Aki is a Finnish male given name but is also a given name in Japanese meaning "autumn".

Toka Aki has shoulder-length gold hair which has two braids covering their ears. They have round green eyes, freckles on their face and yellow-painted nails.

Aki's clothing overall covers most of his skin except their hands and face. Their clothing is a rabbit-themed Ouji style. Their long-sleeve green shirt has a rabbit patter with white rabbit laces. On the top of the long-sleeve green shirt, they wear a white neck warmer which is around a big green ribbon with a removable argyle shaped ruby accessory.

Aki wears short brown pants that have four buttons, brown laces on the leg of pants, and brown suspenders. Under brown pants, they wear vertical lined white and green long socks. The leather boots have rabbit ears and green bootlace. 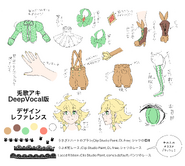 Retrieved from "https://deepvocal.fandom.com/wiki/Toka_Aki?oldid=2526"
Community content is available under CC-BY-SA unless otherwise noted.