Chinese (Mandarin) and Japanese
Suoyun Rila (索韵Rila | Suǒ Yùn Rila) is a Chinese and Japanese vocalist for the DeepVocal engine.

A further update was released on February 11th, 2018, including two new Japanese appends and an update to her Chinese voicebank.[2]

The first demonstration of her Sharpkey voicebank was uploaded to Bilibili on April 29th, 2018.[3]

Since the debut of DeepVocal on July 15th, 2019, Suoyun Rila became a DeepVocal in name, however, she crashes when attempting to use her in the editor.

On February 10th, 2021, a DeepVocal 2 version of Suoyun Rila Chinese was released (along side a new Chinese vocal called Yue Jian Yi) over Bilibili.[6] thus making the need for sharpkey not needed anymore

Her name translated into English means,

Rila - Likely a given name.

Therefore, her name can be interpreted as "Search Rhyme Rila."

Suoyun Rila has pale skin and a slim, childish figure. She has a pink, yellow, white, and blue color scheme, and a rabbit theme. She wears a white colored collared shirt with pink overalls, a blue bow tie, pink gloves, and pink boots with blue socks. She has blue trim around her gloves and overalls, and she wears a pink rabbit-ear hood. She has long coiled blonde hair, and she has two white pom-pom balls connected to a scarf-like pink and blue cape.

Rila's voicebanks are distributed through QQ to Chinese users. Internationally there are official mirrors: 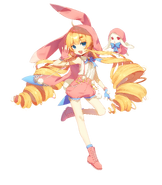 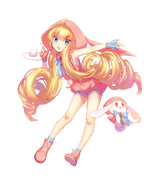 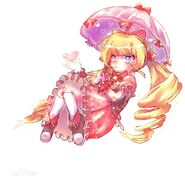 Design for her NIAONiao voicebank.

Retrieved from "https://deepvocal.fandom.com/wiki/Suoyun_Rila?oldid=3967"
Community content is available under CC-BY-SA unless otherwise noted.