DV0
Rory is a vocal for the DeepVocal engine. He is developed and voiced by CROW.

RORY was initially intended as a Deepvocal port of the UTAU UV0 (aka Zero), a previously unreleased UTAU voicebank from the voice provider.

He was recorded, configured, and designed the week following December 25th, 2020, and his first voicebanks were released January 8th, 2021.

Months after his V1 release, development for a new voicebank began, starting with the first drafts for his V2 around April of 2021 and ending with the final drafts in October that year. In late October through early November of 2021, his V2 voice library was nearly complete and updates for his appends ("Power" and "Dark") were recorded.

In late November, the voicebank was nearly ready for release and scheduled for December 2021, with the final date being December 12th.

"These shoes were $200 but I found this jacket on the floor of McDonald's" pretty much sums up his personality.

"Rory" is a Scottish given name meaning "red king", which refers to his design.

Rory is a short boy with a mop of red hair covering his eyes. He wears a school uniform with a dark hoodie rather than a blazer, with a bandage on his shin and cheek, and a crown.

Although it is covered by his hair in his V1 Deepvocal design, he has grayish blue eyes.

Currently, Rory has two versions available (V1 and V2). As of 12/12/2021, only V1 (four expressions) + V2 Natural are available. Rory V1 is available as an install exe while Rory V2 is available as both installer and zip format.

Rory from the box art. 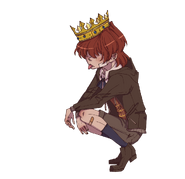 Design for the English voices (UTAU and Deepvocal) 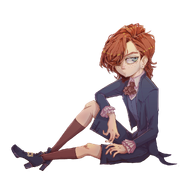 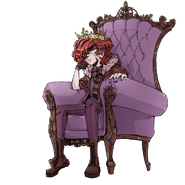 Standalone version from his box art, allowed to be used in PVs