Rabia was announced as an original Sharpkey character via her official Bilibili channel, through a video which has now been deleted. While initially announced to be released for the Sharpkey engine on August 25th, 2018, this was later delayed to September 28th, and then seemingly indefinitely. Rabia was never released on the Sharpkey engine.

On June 8th, 2019, a cover sample was posted of Rabia singing "追光使者" (Zhuī Guāng Shǐzhě | Chasing Messenger) by 林迈可 (Lín Mài Kě), with it being announced that Rabia's DeepVocal voicebank would enter a public testing period within the coming two months.

On June 13th, 2019, Rabia was postponed until mid-2020 for reasons pertaining to the voice provider's schedule. This was announced through a post on her official Weibo page.

On August 21, 2020, Rabia was confirmed to be a launch vocalist for the new DeepVocal2 engine. Her DeepVocal2 voicebank was demo'd on October 3rd, 2020, and a DeepVocal 1 version of her voicebanks was released. Downloading the file requires an account for either the Chinese messaging app QQ or WeChat.

Her name, "瑞比娅" (Ruì Bǐ Yà) (romanized as Rabia), has no translatable meaning, and is likely just a regular given name.

She has pale skin and white hair. She wears a lavender bow in her hair. She has a celestial, four-pointed star theme, and wears many of these on her. She wears a violet dress with lavender trim and a violet cloak with pink trim. She has black gloves and orange eyes, with a short dress that ends in frills and two lavender laces. 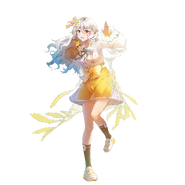 Rabia Logo
Add a photo to this gallery

Retrieved from "https://deepvocal.fandom.com/wiki/Rabia?oldid=3966"
Community content is available under CC-BY-SA unless otherwise noted.