http://canon-voice.com/
Namine Ritsu (波音リツ), originally a UTAU, is a Japanese vocal for the DeepVocal engine (though he was announced for the Sharpkey engine).

In the wake of the first successful troll from the "Vippers" (Vip News Bulletin@2ch users), known as Kasane Teto, annual fake VOCALOIDs developed by "Crvpton" were developed by the same bulletin board, though noticeably less serious. Namine Ritsu was first released for the UTAU synthesis engine on October 12th, 2009.[1]

In 2018, a placeholder button was added to Ritsu's voicebank list.[2] Leaving users questioning the possibility of a new voicebank. The website was updated with information about a potential Sharpkey voicebank.[3]Canon mentioned on twitter that the sharpkey voicebank was finished on October, 2018 but wasn't realeased due to circumstances.[4]

Ritsu is a 6 year old okama (crossdresser) and a bully who's favorite tactic is purple nurples. He enjoys Choco Krispies and chinese cabbage, with the latter being his official "character item". Despite being assumed Japanese, he is misanthropic and loves North Korea, while disliking Japan.[5]

Ritsu has flaming red hair and a purple top hat with a small veil. His eyes are dark purple that fade into canary, that match his violet headset with orange illuminations. Ritsu has a bustline but is shrewdly covered by the upper wear with no exposed cleavage. The official explanation for this is that missiles were built into Ritsu's torso, not a padded bra as some fans speculate. This also explains why he weighs 25 tons. He also has a set of circle rainbow-colored keyboards around him.

All of the above are UTAU.  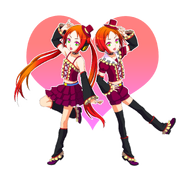 Official Artwork by kikunoji that appears on the website 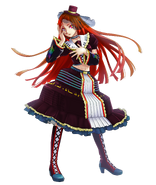