https://www.crusher-p.com/maki
Maki Watase (渡瀬マキ | Watase Maki) is a newly migrated vocal for the DeepVocal engine. She was developed by Infoholic and released by Crusher-P. She currently has a 4 pitch beta release.

On May 3rd, 2009, a 1 pitch CV Maki Watase voicebank was released for the UTAU engine. Over time, she was updated with various voicebank releases of different recording styles and tones.

Her appearance changed frequently. Maki was typically distributed from her original home, UTAU-Dreams, a forum website dedicated to meeting new members of the UTAU community. After the website's extinction, Maki joined VOXYZ until her distribution halted for some time. Maki is now no longer affiliated with other websites or UTAU groups.

Over the years, Maki has had many changes in both appearance and personality. To distinguish between both the UTAU version of Maki's character and DeepVocal's version, it's easiest to just consider this version of Maki as in a parallel universe.

Maki Watase is always in a good mood. She hopes to connect with people's emotions through her voice and instill a sense of comfort. Maki rehearses frequently, and takes her job as a virtual idol very seriously. She is excited to make her debut with three of her upcoming DeepVocal friends. She enjoys life more with her headphones on, and opts to roller-blade her way to work.

"渡瀬" (Watase) is not known to mean anything significant other than Watase. "マキ" (Maki) is a common given name, and is a shortened version of her full first name, マキシマ (Makishima). Maki is not named after the notable Japanese singer with the same name. That was just kind of a freak coincidence.

Maki Watase wears a lot of clothes. She has gradient dark to light purple dress accompanied with a heart shaped pendant that rests on her chest. She wears gloves with uneven lengths, platform shoes with see through heels, a garter, transparent jacket and large circular purple glasses. She has an array of rings and bracelets, and a blue tattoo. She has blue eyes, and long wavy brown hair that reaches half way down her back. Her hair is also styled in two buns on either side of her head, and she has bangs that cover her eyebrows. 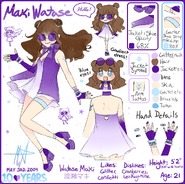 by Hats
Add a photo to this gallery

Retrieved from "https://deepvocal.fandom.com/wiki/Maki_Watase?oldid=2541"
Community content is available under CC-BY-SA unless otherwise noted.