https://dvtoka.weebly.com
Lychee is an upcoming vocal for the DeepVocal engine.

She is a Japanese voicebank both voiced and developed by YukitoYuki (幸兔雪).

Lychee was first released on 8 March 2015 as a CV voicebank for UTAU software.

From 2015 to 2018, she reserved multiple Japanese voicebanks (CV, CVVC, VCV, and an Append), Finnish CVVC, and a test voicebank for Mandarin Chinese that functions as Ca V.

On 8 October 2019, the author posted an alpha sample of Lychee's upcoming DeepVocal voicebank on their Twitter and Bilibili.

On 4 November 2019, the BETA version was released. Unlike the Alpha version, it has no mid nor high samples configured.

On 18 January 2020, YukitoYuki shared a download link of ver 1.0 of Lychee's DV voicebank on Twitter. Later on 12 May 2020, an official voicebank release video singing daniwell's "Wonder of Wonder" was posted.

Lychee is an anthropomorphic (furry) fox-like alien from a faraway star from space. For reason, she landed on the Earth and is living with fellow humans peacefully.

Just like a fox in a Japanese folktale, her special ability is transforming. With her ability, she can disguise as others, including humans, but she's not good at it at all and gots always busted (her tail cannot transform or be removed. Also her voice stays as hers).

Her personality traits are very energetic, cheerful, and competitive. Her catchphrase is “Yay! Let’s play!”.

Lychee's name comes from a type of fruit. An official English pronunciation of her name is "lay-chee" or [laɪtʃiː] (IPA).

Note: Her name is NOT written as ライチ officially in Japanese but as "Lychee" just like in English. ライチ is just a pronouncing guide for Japanese speakers.

According to UTAU Lychee 3rd Anniversary video (at 0:26), the author named her "Lychee" as they like lychee fruit.

Lychee is a fox-like anthropomorphic/furry creature that stands with two legs. Her face and half of her arm, legs, and tail are covered in white fur, the rest of her body and human-like hair is brown. She has sharp claws painted in pink. Her eyes are heterochromatic: right eye yellow, left eye blue.

She wears pink heart-shape sunglasses and has a green band-aid on her right cheek. She keeps her hair in ponytails with blue and yellow-colored ribbons that have white start printing all over them.

She wears a blue t-shirt that has a big print of a rainbow, short pants that are in a colorful flower pattern, and pink rain boots that have red strawberry printing. On wrists, she has a pink watch and two wrist accessories that are green and yellow. 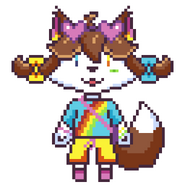 Retrieved from "https://deepvocal.fandom.com/wiki/Lychee?oldid=3061"
Community content is available under CC-BY-SA unless otherwise noted.