An initial sample of what was known as Peiton's DeepVocal voicebank, singing a part of the song "素敵だね?", was uploaded to SoundCloud on August 22nd, 2019[1]. This extremely roughly configured sample was made from new recordings made specifically for DeepVocal. At the time of this WIP, "Peiton’s" Japanese DeepVocal voicebank was only 3 pitches. The voicebank title was also noted to be a placeholder[2].

He is expected to have a total of 5 regular pitches with an added falsetto pitch in order to match his UTAU counterpart’s range[3].

Though his counterpart is prominently known as an English voicebank on the UTAU platform, Leigh's creator has stated that English capability will be on hold until more consonant-related support is added to DeepVocal’s CVVX system. With that being said, Leigh will not have an English voicebank like Peiton's any time soon. Other than that, he is expected to use a custom reclist based off of Peiton's UTAU voicebank.

He had been released as a public beta, but the second update has been confirmed to be his first genuine release. It can be downloaded here.

peYton has confirmed that a new build of Leigh's Japanese voicebank that focuses on bug-fixes regarding [n] vowel transitions as well as the addition of a new falsetto pitch should be released by the end of February of 2020.

A major update to Leigh’s voicebank has been released as of February 28, 2020. It distresses the fixing of all the bugged [m], [nn], and [ng] vowel transitions as well as placeable VX sounds and a new A4 falsetto pitch. It can be downloaded here.

With the most recent English tests on peYton’s character “Bukimi,” it‘s implied that Leigh may be receiving an English voicebank on DeepVocal in the near future.

He is a Welsh Corgi. 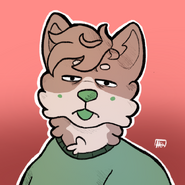