Kuro was initially released for the UTAU engine on September 23rd, 2014.[1] Since then he has been updated, received extensions, as well as more languages.[2] On June 21st, 2019 his DeepVocal debut was posted onto Twitter.[3] It is unknown how many, if any, of the additional voice libraries will be ported to the DeepVocal engine at this time.

Kuro (黒) refers to "black", a prominent color in his designs. Boushuku (昴宿) has yet to be fully interpreted.

Kuro is a rather fit young man in most depictions. His default outfit is of him wearing your average student attire; white dress shirt (with sleeves rolled up), black dress pants, with a black and red tie. His hair is short and black, with his eyes being a vibrant red that also appear on the soles of his boots. 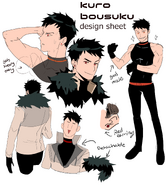 Tagalog (UTAU) design by Rev
Add a photo to this gallery

Retrieved from "https://deepvocal.fandom.com/wiki/Kuro_Bousuku?oldid=2877"
Community content is available under CC-BY-SA unless otherwise noted.