Super_Nova
Koiroid is a vocal for the DeepVocal engine. She was originally made for the Utau engine.

Koi is a wise character who acts as Etsuko Akane's (an UTAU) mother figure. She is very oblivious to what's cool nowadays (particulary meme culture), but she tries her best. She enjoys working on cars and various machines in addition to lifting weights and rollerskating in her freetime. She is aromantic asexual.

Koiroid's name is a portmanteau of Koi (Meaning "love" in Japanese) and android. 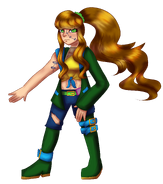 Retrieved from "https://deepvocal.fandom.com/wiki/Koiroid?oldid=3179"
Community content is available under CC-BY-SA unless otherwise noted.