Chinese (Mandarin)
Huan Xiao Yi (幻晓伊 | Huàn Xiǎo Yī) is a vocal for the DeepVocal engine. She was developed and released by Boxstar, and is the oldest vocal available for DeepVocal. She was originally made for the Sharpkey engine, and was the first vocal released for it.

On July 21, 2016, Boxstar released the debut video[1] for the Sharpkey engine and Huan Xiao Yi. They were available for download on that date as well. She was the first vocal released for Sharpkey.

In an interview with Vocaloid News Network, [2]on August 25th, it was confirmed that both Huan Xiao Yi and Sharpkey were solely developed by Boxstar.

In the same interview both the name interpretation and introduction, as well as some development information, were revealed, as shown in etymology. Her temporary name during development was "晴音 (Qíng Yīn | Clear Sound)."

Her voice provider has not been revealed, though it has been confirmed she is not involved in the VOCALOID or UTAU communities at all.

Since the debut of DeepVocal on June 7th, 2019, she has become a DeepVocal, and is compatible with that engine.

Boxstar describes her as, "..the singer who leads you to the fantasy world of music." This is reflected in her status as the first vocal developed for the Sharpkey engine. Concept art shows that Xiao Yi is based off of a piano mixed with a magical singer.

When "幻晓伊" (Huàn Xiǎo Yī) is directly translated from Chinese into English, the characters that form her name mean:

Huan Xiao Yi has the same illustrator as VOCALOID3 YANHE[3]. She has pale skin and long pink hair that fades into a darker, more saturated hair, and pink is prominent in her color scheme. Her black skirt has a piano pattern and is pink on the inside of the fabric. She wears matching black stockings with light pink boot heels and a bow on her top. Small accessories such as a wristlet and bronze hair tie are included as well. 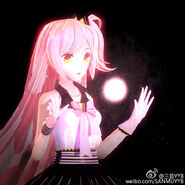 More examples of the MMD model. 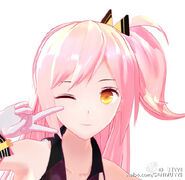 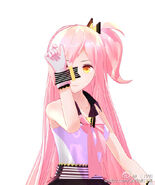 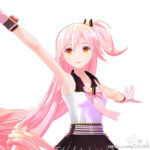