Development of what is described as a port of Bukimi's English voicebank over from UTAU to DeepVocal began in late February of 2020. Given the current state of the phonetic system of DeepVocal, Bukimi's port has been described as frustrating to work with.

A very early build of Bukimi's voicebank that can be tested can be downloaded here.

As a personal reminder from peYton himself, please don't expect a very HQ voicebank or a final product. This is more like a proof of concept voicebank that exists for the purpose of testing things out!

They are a Bat.

They are described as a gremlin friend that puts everyone else before them. They wear a scarf that mimics that of their arms by default, but also function as extra limbs. 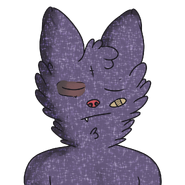 Retrieved from "https://deepvocal.fandom.com/wiki/Bukimi?oldid=3144"
Community content is available under CC-BY-SA unless otherwise noted.