Japanese / English
Akane no Oni (茜ノ鬼) is an upcoming Japanese vocal for the DeepVocal engine.

Akane was originally an UTAU bank named Aika Anno back in 2013, she originally received two CV banks, an Act 1 and an Act 2. In 2018 she was rerecorded as a VCV monopitch bank named Merlot and an Arpasing bank named Champagne.

Her name, 茜ノ鬼 (Akane no Oni), is comprised of the characters:

An appropriate English rendering of these characters would translate to "The Crimson Demon".

In her current appearance she takes on a more demon appearance with decoloured skin, ripped clothing, a tail, and horns. Her dress is ripped at the seams and singed with a hole in the centre of her stomach revealing her spine and rib cage. She wears fingerless gloves with the same translucent red fire-like skin and skeleton showing. Her hair is a simple bob with a tailbone laurel wreath.

In her old UTAU design, she had short brown hair with a side ponytail that fade into a dark purple. a red shirt, blue skirt and white boots.

No public release as of yet please check again shortly!

Her expected release is mid to late December. 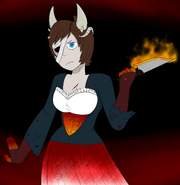 Retrieved from "https://deepvocal.fandom.com/wiki/Akane_no_Oni?oldid=2424"
Community content is available under CC-BY-SA unless otherwise noted.